The shape and modality of the e-VITA virtual coach itself will be customizable depending on user preferences and individual needs, in a practice-based selection process. The devices to be considered and explored herewith are depicted here: 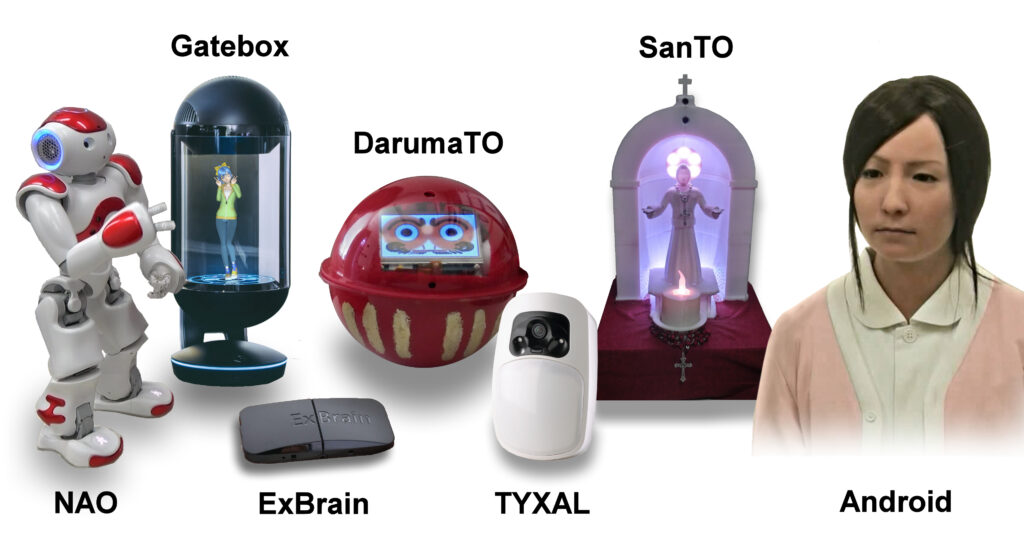 NAO is a small humanoid robot developed by Aldebaran Robotics, a common platform for studies of human-robot interaction across the world thanks to its ease of use, its software customization capabilities and its pleasant appearance. NAO is 74 centimeters tall, and it features up to 25 degrees of freedom. It is the only device, among the ones e-VITA is considering, that has autonomous mobility capability.

DarumaTO-2 is a social robot with a familiar appearance for older generations that provides company and monitors the health of older adults. It can communicate through visual tracking, voice and facial expressions. DarumaTO has been introduced to the homes of older adults in Japan and has obtained favorable acceptance. The current hardware can be expanded in the present project through the integration of sensors and a complex dialogue system.

Tyxal is a sensing system that can detect any moving human presence with video function that can be used at distance. Tyxal is one of the sensing technologies of the e-VITA project that can be used to measure the end user’s emotional and physical behaviour.

SanTO is a robot that can be a prayer companion, especially designed for Christian Catholic people, and contains a vast amount of teachings, including the whole Bible. Communication takes place through voice, vision, touch and lights. No buttons, screens or keyboards are used, thus realizing an user-friendly interface.

The Android robot is a social robot which resembles humans and can communicate with humans. The model e-VITA will use for a Living-Lab study, can blink and express facial expressions such as smiling, surprised, and angry. As it can neither stand up nor walk, it will be employed in a sitting position, where it can communicate through verbal and non-verbal behaviour.